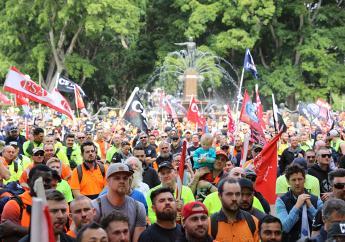 The CFMEU National Construction Secretary has raised serious questions about the Attorney General’s links to a prominent Perth builder and Liberal Party donor who a judge described as having a ‘blind hatred’ for the CFMEU which contributed to significant safety breaches.

CFMEU National Construction Secretary Dave Noonan said the Attorney General should explain his links to Western Australia builder, Gerry Hanssen, who was penalised more than $62,000 after CFMEU organisers were blocked from entering a Perth worksite where a young German woman had been killed weeks earlier.

“Gerry Hanssen represents the worst aspects of an industry where law-breaking builders get away with murder while workers are fined for taking industrial action,” said Dave Noonan.

“We have a government that goes after union members for taking tea breaks while ignoring rampant safety breaches that put workers lives at risk.”

“The death of Marianka Heumann in 2016 happened on a site where the union had identified significant safety concerns. After she fell 13 floors through an unprotected hole, an unrepentant Gerry Hanssen wrote a letter to her family blaming Ms Heumann for her death.”

“Two weeks after this young woman died, CFMEU officials attended the site to investigate ongoing safety breaches after being tipped off. Hanssen unlawfully refused entry to the site and prevented safety inspections in a move described by a federal court judge as driven by his ‘blind hatred’ of the union.”

“This must raise serious concerns about exactly who is dictating government policy on industrial matters at a time when workplace safety and building standards are being ignored.”

"Gerry Hanssen is a prominent Liberal Party member, has been a significant party donor and is based in the Attorney General's seat of Pearce. If people like this have the ear of Christian Porter is it any wonder that the government relentlessly attacks working people while ignoring the safety issues and dodgy construction standards that are now plaguing the industry?"

“Given the seriousness of these safety breaches and the unrepentant attitude of the builder, what action will Christian Porter and the Federal Government take action to ensure he complies with the law? Or are they only interested in going after trade unions for beaching civil laws?”