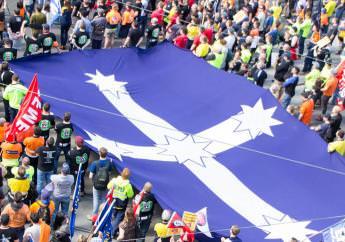 The CFMEU National Construction Secretary has slammed the ABCC for targeting dozens of Queensland workers with $42,000 fines in a dispute over flags while ignoring the crisis in confidence enveloping the Australian construction industry.

CFMEU National Construction Secretary Dave Noonan said the fines show the government will target ordinary workers rather than deal with the real problems in the industry.

“Dozens of workers who stopped work on a Queensland building site after CFMEU flags were removed are now facing financial ruin because this government has an ideological obsession with attacking ordinary union members,” said Dave Noonan.

“The government and the ABCC ignore rampant safety breaches in the industry and fail to prosecute builders who put workers’ lives at risk but would rather try to financially ruin union members and their families.”

“The fines issued to these workers expose the lie that the ABCC is needed to stop ‘lawless unions’ from wielding too power. This is about the government prosecuting ordinary workers.”

“The government’s priority is to punish workers for taking industrial action when wage theft is rampant across the economy and when we have a crisis in confidence in building standards and safety.”

“The fines these workers face total more than $2.75 million. Last week we saw a builder fined $450,000 after a worker was killed on an unsafe site where the union had identified numerous risks which the builder ignored.”

“We have buildings that are fire traps or collapsing because of the failure to properly regulate an industry where too many builders flout the rules and ignore regulations.”

“Yet the government wants to expand the powers of the ABCC, which ignores safety and building standards and instead acts more like the government’s own secret police aimed at stopping workers from organising collectively.”

“The community is right to question the government’s motives and priorities on worker safety.’