ABCC would provide no benefits to industry 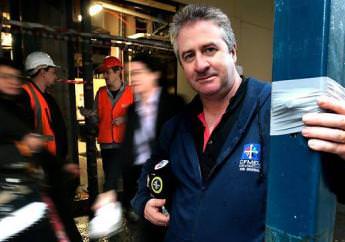 None of the arguments put up by the Liberal Government in support of the ABCC stack up, according to the CFMEU.

National CFMEU Construction Secretary Dave Noonan, who appeared before the Senate Education and Employment Committee today, said the ABCC would discriminate against one group of workers by imposing harsher penalties that do not apply to the rest of the workforce and would provide no benefit to the industry.

“Ministers in the Turnbull Government, the media and the Fair Work Building Commission have all said we need a tough ‘cop on the beat’ to stamp out corrupt and criminal behavior. The ABCC is an industrial regulator and has never had any role in investigating breaches of the criminal law.

“The government talks up the economic benefits, but the economic case in support of the ABCC has long been discredited.

“Even the Heydon Commission Final Report points to the conclusions of the 2014 Productivity Commission Report which says there is no credible evidence that the ABCC regime created a resurgence in construction productivity and that its removal has had a negative effect,” he said.

Mr Noonan said that despite assertions by the Government that the Heydon Royal Commission had strengthened the case for the ABCC, the Heydon final report rejects the idea of creating industry-specific legal restrictions. It also concludes that different penalties should not be included in legislation that applies to one industry.

“When looked at objectively, it’s clear that the ABCC is not about improving the industry in any way. It’s about taking away workers’ rights in order to benefit the hip pocket of developers and large multinational construction companies.”

Mr Noonan said that the Government should focus its priorities in addressing issues that are at the forefront of the industry such as safety and training.

“There have been eight fatalities this year so far. Our union is working hard on the ground to improve safety. The Federal Government should bring all parties to the table to work together on this, not expend all its resources on fighting the union.”

Mr Noonan also referred to the reports yesterday of the 20% slump in apprenticeship numbers and said the Government had turned its back on young workers.

“The ABCC and the Code attached to it, actually outlaws our ability to negotiate for more apprentices in the industry.”

“When the focus of the Government is on treating the industry as the battleground for their ideological war, it’s clear they’re not interested in helping young people find work and equipping them with skills for the future.”

Visit Stand Up. Speak Out. Come Home to sign our petition to stop the ABCC.