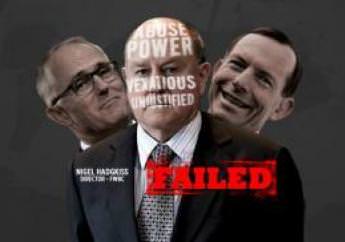 The CFMEU has called for Malcolm Turnbull’s industrial political attack dog, the ABCC, to be wound up after a judge criticised a case as “a completely unnecessarily waste of public money”.

“Last financial year the Turnbull government spent more than 10 million dollars in its attack on construction workers," said John Setka, Victorian Secretary of the CFMEU Construction Division. “Again and again the Liberal Party’s ABCC is caught out blowing their budget and overreaching in their ideological war against unions.”

"This latest attack saw four AFP officers called to a building site under the direction of the ABCC and two workers charged for simply having a cup of tea and talking about four wheel driving. The judge rightfully described the case as a ‘storm in a tea cup’."

"The ABCC does nothing about wage theft, sham contracting and safety short cuts that kill workers, that’s left to us, the CFMEU. Then they waste more money attacking us for doing our job.”

“Australian taxpayers are sick of paying for Malcolm Turnbull’s political agenda, it’s time to abolish the ABCC and for the Liberal Party to fund their own political campaigns."

"Union members, workers, the whole labour movement is united to ‘Change the Rules’ and stop this shameless waste."