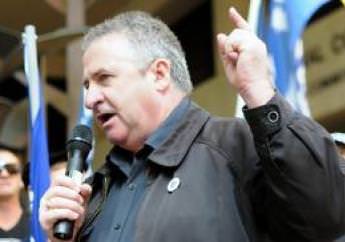 The passing of the bill to bring back the ABCC by the Senate this morning through a backdoor deal with One Nation, Senators Nick Xenophon and Derryn Hinch has sold out the civil and industrial rights of 1 million Australian workers.

CFMEU National Construction Secretary Dave Noonan said that the rights of 1 million construction workers have been sold down the river by cross bench senators to horse trade with the government on other issues.

“These are laws that will take away rights, will endanger safety and conditions for ordinary workers in the industry. We know this because we’ve been here before and that’s what happened.”

Mr Noonan said the union will continue to stand up for its members, fight for safety on sites and bargain for better conditions for workers in the industry.

“We will also continue to fight for an end to bad and discriminatory laws that favours the interests of big property developers and multinational construction companies over the interests of ordinary working Australians.

“These are bad laws and that’s why it has taken the government three years to pass them.”

“They deserve to be congratulated for staying true to their principles and for voting down laws that are essentially an ideological attack on construction workers.”