Big victory for workers in Wollongong, the Hunter as union secures a fair deal from Boom Logistics 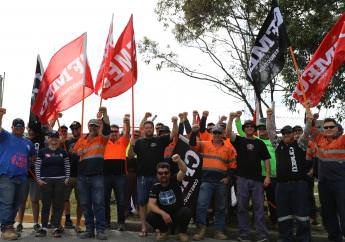 A dispute years in the making between Boom Logistics and its workers at mobile crane yards in Port Kembla, Singleton and Carrington has been resolved after a concerted union campaign that saw workers at all three yards take five weeks of protected industrial action.

The workers had not received a pay rise in over five years, when they agreed to roll over an old agreement and even freeze wages to help the company - reportedly struggling at the time. But while the company’s position improved and management received pay rises of over 20 per cent, it fought pay rises for the workers.

Late yesterday the union secured an agreement with the company for a new EBA covering all three sites that provides for a wage increase and improved allowance and redundancy benefits.

“This is a great victory for the workers and the union in yet another epic battle over what should be fundamental workplace rights to fair pay and fair treatment,” CFMEU NSW Construction Secretary Darren Greenfield said.

“The workers came to the party when the company was struggling. They agreed to modest pay rises and in some case, wage freezes.

“But the loyalty and sacrifice of the company’s long-term workforce amounted to nothing once Boom was back on its feet, giving management generous rises, and stuff all for the workers.

“Our members’ demands were not outrageous, they just wanted a fair days’ pay for a fair days’ work. They work long hours in a dangerous profession.

“We are pleased the company has come to its senses and finally negotiated a fair Agreement – but it should never have come to this.

“This is a tactic repeated over and over again by companies in Australia – erode wages and conditions, and gradually replace permanent staff with cheap casual labour.

“This is why we need to change the rules and restore fairness to Australia’s Fair Work system.”