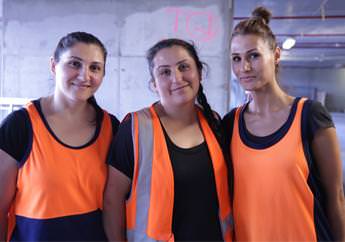 The CFMEU has today called on employers and governments to support greater participation for women in male dominated industries.

"We need more women being active in our industries and in our Union. We need a genuine commitment from employers and governments to bring about this change," he said.

"We need more programs that are designed to attract women to our industries. We need more apprenticeships and we need them targeted at women.

"One way we can begin to address the gender pay gap is for governments and business to encourage and support women moving into male dominated industries," he said.

"Greater participation in our industries by women makes us all richer and it makes our workplaces more diverse.

"It's only when we harness our full potential that we make our union stronger for our members, their families and the community."

The CFMEU has moved to change its rules to ensure that more women are more involved in the decision making process and represented at all levels of the Union.

As part of the changes, the CFMEU Women's Committee has become a formal committee of the Union.

Mr O'Connor said the rule changes were designed to give women a stronger voice within the CFMEU.

"Our members work in industries that are dominated by gender stereotypes, so we are in a great position to fight discrimination and support gender equality," he said.

"Women are highly respected within our Union and this decision is a reflection of that.

"We are seeing a shift where a lot more women are joining our industries and this means women need to be represented at the highest level.

The CFMEU stands in sollidarity with women workers on this International Women's Day.