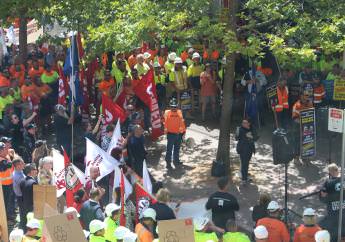 The Australian Building and Construction Commission has been dealt another embarrassing blow today with the Federal Court dismissing all claims against the CFMEU and its’ officials in a claim that director Nigel Hadgkiss had billed as potentially costing the union $1.1million.

“Nigel Hadgkiss has always been a Liberal Party apparatchik, but, even for him, this was overreach.” said Mr. Dean Hall, Secretary of the CFMEU ACT Branch.

“The MBA and the ABCC have made their political motivations evident in this case.”

Evidence given by the MBA’s former Director, John Nikolic, who also gave evidence in the Trade Union Royal Commission, was rejected by the judge, for reasons including that Mr Nikolic was “not an independent witness”

In his Judgment this morning Justice Flick said:

“..the concern of the CFMEU was not unfounded and provides a further reason for concluding that the Director has not discharged the onus of proof… It is further separately concluded that the purpose sought to be achieved by the closure of the Rosevear Place Gate was founded upon concerns as to safety..”

“This was always about safety. There was construction work going on, next to two childcare centers no less, and we had a genuine concern that there was asbestos present.” Mr Hall said.

“Taxpayers are right to question Mr Hadgkiss’ motivations. A senior public servant would; you’d think, try to avoid the appearance of partisan behaviour."

“We will never stop standing up for safety and the community, no matter how hard the Government want to send their secret police after us.”