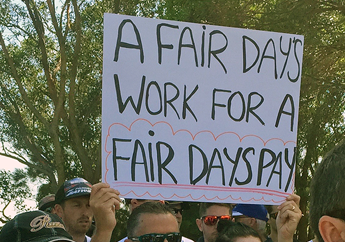 In a major victory for our Union’s campaign against anti-worker labour hire practices, the Federal Court last week ruled out a “sham” enterprise agreement voted on by only three workers employed by One Key labour hire company.

That agreement then covered 1118 people working for One Key in the black coal industry in Queensland, who became locked into a deal that saw them lose casual employment protections and exchange for $1 a week above the award minimum.

In other words – a total ripoff. It’s a common tactic of labour hire firms like One Key wanting to erode the pay and conditions of miners.
In Court, we argued that One Key had not taken all reasonable steps to explain the agreement and the effect of its terms to all of its employees. The Judge agreed.

While One Key may appeal the decision, the CFMEU intends to pursue claims for back-pay of annual leave and personal leave for affected workers, and the decision may also flow through to One Key workers in NSW.

This week, the Fair Work Commission quashed another 2 agreements, this time involving AWX Labour firm in the black coal industry, also in Queensland.
Again, we argued that the company had not taken all reasonable steps to explain the agreement and the effect of its terms, to workers. The Full Bench agreed.

This is not the first time the union has had to stand up to AWX.

Last year, AWX tried to have a single enterprise agreement approved, but after our Union’s intervention AWX withdrew their application.

These decisions are a major victory in the campaign against unscrupulous labour hire practices, and they will have ramifications for all industries.

Last week following the One Key decision, ACTU secretary Sally McManus said "too many employers are exploiting loopholes in the current laws that let them get away with these sham agreements.

"Sadly though we know that these sham agreements are more and more prevalent across the economy and that's why we need to change the rules to protect working people."