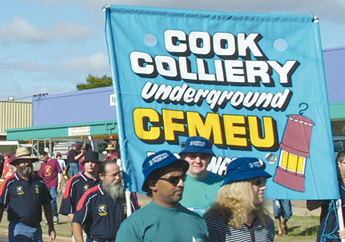 Liquidators PPB Advisory have confirmed with the CFMEU that Cook Colliery mineworkers will receive their outstanding owed entitlements by the end of the week.

CFMEU Mining and Energy Division Queensland District Vice-President, Glenn Power said “justice has finally been done for our members and their families who have had to fight tooth and nail, standing shoulder to shoulder, to have their rightful entitlements paid in total.

“It is an absolute disgrace that without a fight, legalised theft would occur to Australian workers and their families, by an off shore foreign owned corporation on the watch of the Turnbull Government.”

“Australian workers and their families deserve good, steady jobs and it’s time mining giants are held to account in this distorted system that clearly demonstrates our laws are broken.”

“It was only through the persistence of these CFMEU members and their families to have the tenacity to stand up and fight back, with the assistance of the CFMEU leadership and other divisions of the CFMEU, that justice has finally prevailed.”

“Cook Colliery mine has proven over many decades to be a very difficult and challenging mine to operate. I have spoken with Bounty Mining since they have taken over ownership of the Cook Colliery mine and it seems Bounty Mining are enthusiastic about resuming production back at the mine as a bord and pillar operation in the first quarter of 2018.”

“The CFMEU has tentatively scheduled a meeting in January 2018 with Bounty Mining to discuss employment related and other associated matters.”

“Our members and their families can now have a somewhat comforted Christmas from what could only be described as a difficult and uncertain year,” said Mr Power.