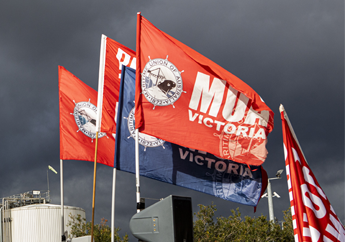 Dubai-owned DP World Australia has today announced plans to slash more than 10 per cent of its workforce, with 100 more jobs scheduled to be axed at both Melbourne and Sydney container terminals.

The cuts — announced to the media before affected workers or their union had been notified — come in addition to another 47 wharfies due to finish up this week in Melbourne.

The Maritime Union of Australia said the timing of the announcement — during protected industrial action at the company’s Melbourne, Sydney, Brisbane and Fremantle container terminals — was a clear attempt to threaten workers into accepting cuts to their rights and conditions.

“From day one DP World started with threats to our families. Management have refused to meet telling wharfies that they’ll get an agreement only if they withdraw their claims and accept the company’s claims, which result in less job security and worse conditions,” Mr Smith said.

“It started with threats to workers income protection insurance, now they are targeting wharfies jobs.”

The MUA slammed DP World for notifying media outlets of the cuts before contacting the affected workers.

“What kind of company tells the media about job cuts before talking to the workers who are directly affected,” Mr Smith said.

“This is corporate bullying and intimidation using the livelihoods of wharfies in an attempt to intimidate the workforce into accepting anything the company wants.

“This situation, where a massive multinational company is showing total contempt for Australian workers and their families, shows once again how broken our country’s workplace laws are.

“Threatening people’s jobs, their livelihoods, and their families well-being should never be considered an acceptable way to achieve an industrial outcome.”