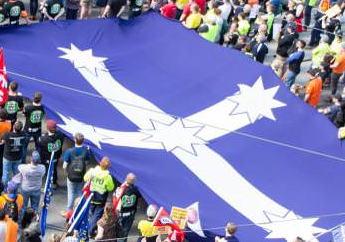 Action taken against the construction giant Lendlease over the flying of the Eureka flag demonstrates how far this government will go in abandoning democratic principles in pursuit of its rabid anti-union agenda.

"It is extraordinary hypocrisy for a government that claims to stand for freedom of speech and of belief to spend ridiculous sums trying to ban the Eureka flag, one of the foundational symbols of Australian democracy, from construction sites," said Dave Noonan, CFMEU National Construction Secretary.

"This government and its Stasi-like construction cop, the ABCC, ignore real issues in the building industry while pursuing their endless culture wars at the expense of workers and the economy."

"Construction workers have already been hit with millions of dollars in fines for wearing union stickers on their hard hats or flying the Eureka flag at building sites."

"The ideological obsession the government has with crushing the right of working people to organise industrially is a betrayal of a key principle of Australian democracy. It is little wonder they see nothing wrong with seeking to ban a symbol of democracy and freedom under which workers have united for generations."

"This action against Lendlease by the regulator comes barely a week after revelations the ABCC has systematically failed to enforce the law against recalcitrant builders responsible for the wage theft, sham contracting and breaches of awards and conditions that are rife in the industry."

"It is beyond a joke that the regulator ignores blatant illegal activity in the industry and instead spends time and resources pursuing a builder for the high 'crime' of union flags being flown on a construction site."

"The ABCC sits on its hands as dodgy builders steal an estimated $320 million in wages every year, and while construction workers are owed $6 billion in wages."

"The ABCC has become a symbol of the corruption of institutions that this government has adopted as part of its standard operating procedure. It is a partisan and compromised body that is worse than useless, it is actively harmful to the interests and wellbeing of construction workers.”