Federal Court confirms workers, not employers, get to decide how they organise 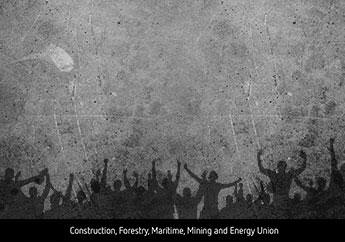 The Construction Forestry Maritime Mining and Energy Union has welcomed today’s decision of the Federal Court of Australia to reject an attempt by employer groups to overturn its amalgamation.

The union, formed earlier this year by the merger of the CFMEU with the Maritime Union of Australia and Textile Clothing and Footwear Union of Australia, said the decision confirmed that it is workers who decide how they organise and represent themselves, not employers.

CFMEU National Secretary Michael O’Connor said the Federal Court decision not only vindicated the union’s position, but also exposed employer groups — in particular the Australian Mines and Metals Association and Master Builders Australia — for wasting their members money waging an ideological battle against the merger.

“Our argument throughout has been that the democratic will of union members should decide how our union is structured, bargains, and represents their interests, not employer groups using legal technicalities to serve their vested interests,” Mr O’Connor said.

“Today’s Federal Court decision has vindicated that argument, it has cemented the merger that formed the Construction Forestry Maritime Mining and Energy Union, and it has made clear to employers that they do not get to decide how workers choose to represent their interests.

“With this wasteful legal battle out of the way we can get on with doing what we do every day, which is work our hardest for our members to improve their wages and conditions and keep them safe at work.”

MUA National Secretary Paddy Crumlin hit out at the employer groups who had been challenging the merger.

“The AMMA and MBA stuck their nose into working people’s business and today the Federal Court has given them a well deserved whack for their trouble,” Mr Crumlin said.

“Like the industrial dinosaurs they are they have again confirmed their point of extinction has arrived. They are an embarrassment really, fools unto themselves and a danger to others. These extremist employer groups wasted millions of dollars of their members money, along with the time and resources of the Federal Court, waging an ideological war right out of the 1980s.

“Australia’s workplace laws have become so skewed in favour of big business that they actually believed employers should have the right to decide how workers get to bargain and represent themselves.”

TCFUA National Secretary-elect Jenny Kruschel said that while the Federal Court outcome was a great victory, it was just one battle in the larger struggle to restore balance to industrial laws in Australia.

“Big business has too much power in Australia, which is why wages have stagnated and insecure work has exploded,” Ms Kruschel said.

“Today’s victory, and the creation of a strong, amalgamated union, is just one step in our ongoing battle to change the rules to ensure working people get a fair deal.

“Bad laws must be challenged, and our strong united union will give our members unprecedented power to take on the system that is working against their interests.”