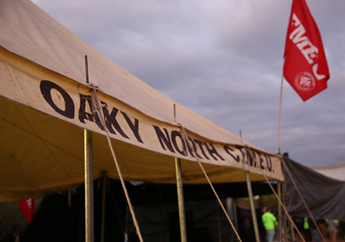 Multinational mining giant Glencore yesterday applied to the Fair Work Commission to terminate the current enterprise agreement that covers employees at the Oaky North Mine, while employees continue to be locked out of their workplace for in excess of 200 days.

The workers recently voted down a third proposed new agreement by the company.

“If Glencore doesn’t get its own way, it tries to tear everything down,” Stephen Smyth said.

“Having made some progress through mediation, instead of continuing on that path, they have applied to terminate the existing Agreement.

“The Oaky North miners have been locked out of their workplace for over 200 continuous days by Glencore, and now the company is seeking to abuse the industrial relations system by applying to terminate the existing agreement.

“They will never break the resolve of the workers by using underhanded and unfair actions.”

The union is urging Glencore to allow the employees back to work and get the mine running productively, while negotiations continue.

“The CFMEU calls on Glencore to withdraw their application to terminate the agreement, to end the lockout, and to return to the bargaining table to negotiate a new enterprise agreement in good faith.”

“We will fight the termination application. It is in the interests of all concerned that the employees be allowed to return to work immediately.”