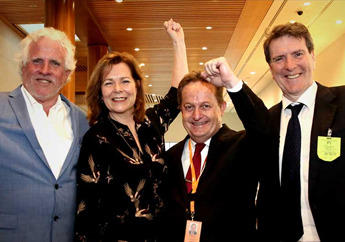 The National Secretary of the Construction, Forestry, Maritime, Mining and Energy Union Michael O’Connor has welcomed the decision of the FWC to approve the formation of the new union by the amalgamation of the CFMEU, TCFUA and the MUA.

“We will hit the ground running immediately, with the first meeting of our senior national officials this Friday, March 9, in Melbourne,” Mr O’Connor said.

“Big Business has too much power, we have record levels of inequality in our community, and working families are finding it hard to make ends meet. We will be fighting every day to restore the fair go.

“What you can expect from us is a clear focus on what we have to do to turn our country around.

“We are absolutely committed to a change of government, to changing the rules to restore balance and fairness into our communities, and to growing our movement.

“It’s time for big business to stop riding on the coattails of everyday working Australians, time the banks stopped ripping people off, and time for every business in this country to pay tax. Nearly 700 big corporations pay no tax, which is a national scandal.”

Michele O’Neil, Textile Clothing and Footwear Union of Australia National Secretary, welcomed the decision, saying: “The TCFUA has a proud history of fighting for the rights of some of Australia’s lowest paid and most exploited workers.

“The combined strength of the CFMEU, MUA and TCFUA in our new union will write a new chapter in Australia’s union movement. Ordinary workers now have a powerful new force for change on their side.

“Big business and the Federal Government should now get out of the way so we can get on with winning better pay, conditions, rights, and secure jobs for our members.”

International President of the new union, Paddy Crumlin, called the decision a proper recognition of trade union rights being directed towards the will of the membership.

“Today is an important part of the renewal of our union and of our movement,” Mr Crumlin said.

“Wherever there is a need to defend the interests of Australian workers, we will be there with them in their workplaces and communities.

“The failure of government to protect those workers from international and national tax avoidance, deregulation driven by corporate self-interest and elitism, and a continuous ideological attack on workers’ rights by many multinational corporations and service providers, means we will also be there globally with other working men and women similarly affected and mobilised.”