Gunner, what a joke! 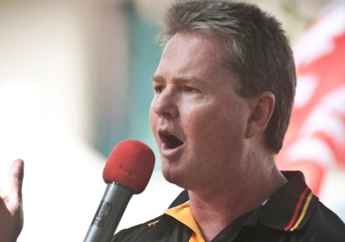 The Gunner Government’s “lifeline” for workers, who were abruptly sacked at the Darwin Inpex project last week, is nothing more than an embarrassing joke that will do absolutely nothing to get them back into work according to CFMEU Divisional Branch Secretary Michael Ravbar.

“Gunner’s $200,000 commitment to re-skill 300 local workers and give them access to upload their CV to an online database will achieve nothing.

“It’s tokenism at its best,” he said.

Over 850 workers lost their jobs over a pay dispute between Laing O'Rourke and Kawasaki Heavy Industries on the Inpex project last week. The workers were given no prior warning and have been left stunned and angry over the sackings.

“The Gunner Government has proven that they just aren’t up for the job,” said Michael Ravbar.

“It’s an absolute embarrassment and proves that Gunner is a weak and lacklustre leader with no idea how to fix important issues.

"The true test for any strong leader when they are in government is how they manage and resolve difficult and important issues. It is obvious that Gunner has failed this test miserably."

Instead of wasting $200,000 dollars on a band-aid fix that won’t achieve a single outcome, Gunner should be proactive and consult with the parties involved and come to a resolution to ensure these workers are re-employed to finish the job.

In the meantime, the CFMEU and other unions are taking the appropriate legal action to ensure these workers are taken care of.