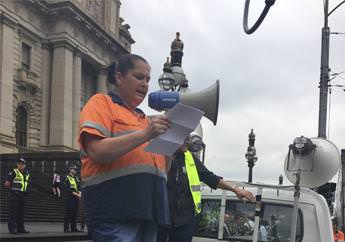 CFMEU members, their families and community should be proud of the massive show of force at the rally for the mill in Melbourne on Tuesday.

Over a thousand people rallied in the city sending a powerful message to the Andrews government that we will not cop the loss of resource and we will fight and fight long and hard to save these
jobs.

The rally met at the Victorian Trades Hall and closed down parts of the city during the march to Parliament.

CFMEU member and Heyfeild mill worker Kerrie Chivers (pictured) addressed the rally and spoke about the importance of  the mill not just to the workers but to the community as a  whole.

CFMEU Victorian FFPD District Secretary Frank Vari spoke to the rally and made it clear that losing this fight is not an option. He called on the Victorian Government to make the wood resource
available so the mill can continue operations.

Luke Hilakari, Secretary of the Victorian Trades Hall Council, told the rally the entire union movement is behind the Heyfield workers.

“The work you do is just so important. Some people might say it’s just 250 jobs, but you know it’s much more than that,” he told the rally.

This show of support has been a huge boost for the campaign to save the mill and the battle is just beginning.

Government MPs later met with members from Heyfield and got the message that 7000 jobs will be at risk if this situation is not fixed.

The Union is ramping up our fight to save the mill with a detailed campaign strategy planned for the coming weeks. More details to come.