Huggies’ workers should not be treated like Number Twos 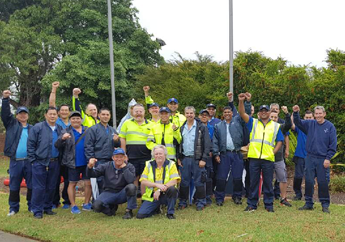 Workers at Kimberley Clark who make Huggies nappies are fighting to retain their pay and conditions following demands from the company that new workers take a 25% pay cut.

Textile Clothing and Footwear Union of Australia National Secretary, Michele O’Neil, said the workers are taking industrial action as a result of this attempt to downgrade their pay and conditions.

“There has been a breakdown in negotiations for a new agreement because the company has declared that it wants a two –tiered wage system with some workers receiving 25% less than the current rate.

“They also want to substantially slash other entitlements such as redundancy provisions and are offering only a 1% pay rise.

“One hundred and forty-five workers are standing together against this attempt to drive down conditions and divide the workers,” she said.

Ms O’Neil said there was no reason for Huggies to be taking this position, given that it’s one of Australia’s leading brands.

“Everybody knows Huggies. Millions of parents purchase these products around Australia day in, day out.

“They have a reputation for their quality – a direct result of the skill and hard work of the workers who make them.”

“A two-tiered system which pits one class of worker against another is not a way to build a harmonious workplace.  This is a bum deal.”

“Huggies workers won’t stand for being treated like Number Twos.”