Joe McDonald hangs up his braces 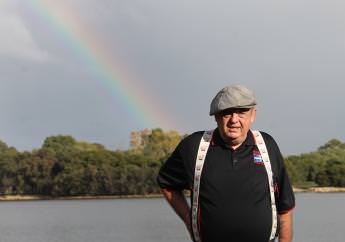 What can we say about Joe McDonald that hasn’t already been said? If Joe was asked to say one word that described his time in the union it would undoubtedly be ‘Militant’.

As young boy from Ayrshire in Scotland Joe arrived on these shores as a 14 year old, who would have thought that the one time boy from Auld Dreghorn Primary school would end his career as National President of the CFMEU.

As a union member, Secretary of the CMEU WA and assistant secretary of the CFMEU WA through to National President Joe has devoted 33 years his life to core union and social values. Along the way there have been plenty of blues on and outside the picket line. He has taken on the big end of town, their representatives and conservative politicians, never apologising for his actions or the consequences. His aim was always true. To win better wages and conditions for workers and to save lives out there on the job.

His actions to spark better workplace safety often ended up in the judicial system but Joe would be the first to say he’d rather spend time in the courts than at Funerals. He was often the first point of contact in the union for bereaved family members who lost a loved in the course of just doing their job.

He is passionate about safety standards being met so workers can go home to their loved ones alive every day. If that meant ruffling a few feathers then so be it. Better to try than to see someone die.

No one more than Joe knows how many people have died during this reign as a union official. However what we can never know is how many people are still alive because of the various actions he took.

As Joe prepares to hang up his braces as a union official for the last time, he can proud of the many social issues he has championed.

He has in his own words taken on the ‘war in the kitchen’ against domestic violence. Shining a light into the dark corners of a national problem. No one should live their life walking on egg shells within their own home. He is especially proud of the work he has done to support ‘Women’s Refuges. His speech on the issues around Domestic Violence received a standing ovation at the National Labor Party Conference.

He has helped to raise funds to put food in the belly of the poor, warm clothes on the homeless and toys under the Christmas tree for underprivileged kids. Not to mention organising countless whip rounds for workers and families who have done it tough.

Joe’s efforts to highlight the plight of our indigenous brothers and sisters culminated in the establishment of the Vincent Lingiari room at Trades Hall. As did his support for the opening of the May Holman Room, as a place to honour the role of women in the union and labor movement.

To paraphrase Steinbeck’s Grapes of Wrath: ‘Wherever you find the little guy being beaten down, injustice, unscrupulous employers and workers needlessly dying on the job, there will always be a Joe McDonald.’

When Joe retires on October 13th he doesn’t need to be sad that it’s over rather be proud that it happened.