Locked out for over 50 days 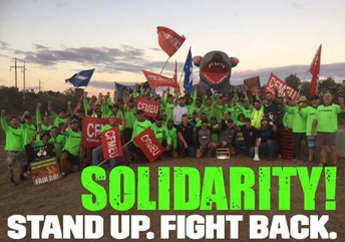 The livelihoods of 190 workers are hanging in the balance after multinational mining giant Glencore took the extraordinary step today of locking out its permanent workforce at the Oaky North mine for a further 14 days.

It will bring to a total of 51 days Glencore has locked the workers out in the current dispute.

At midday today, 190 workers from the mine were set to return to work.

However, at 6 am today, the company emailed the workers to tell them they would be locked out for a further 14 days.

The CFMEU Mining and Energy National President Tony Maher said the company was out of control.

“It absolutely beggars belief that a foreign owned company can lock out Australian workers for such an extended period of time, for no reason, and with no consequences.

“Their actions are even more staggering given their mega profits just posted. Glencore’s revenue Australian coal operations jumped from US$1.77 billion to US$3.1 billion in the last half year.

“And their cash profit on every tonne of coal produced was around 41 per cent.”

Tony Maher said Glencore clearly had an agenda to replace the entire workforce with casual labour.

“Everything they have done over the past few months has been for one purpose – to break the workforce and bring in cheap contractors.

“This is un-Australian and it should be illegal, but they are getting away with it under the Turnbull Government’s industrial relations regime.

“If any further evidence were needed that Australia’s industrial laws are completely broken, Glencore has provided it.”

Over the past three months, Glencore has:

The union is now seeking a 3% per annum pay increase, as the coal industry contributes to the rise of mega-profits.