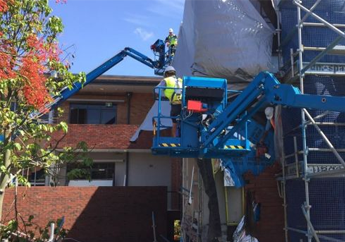 An apparently red-faced Hutchinson Builders have spent the first week of 2017 cleaning up after another near miss on one of their projects.

Sheer luck was on Hutchinson’s side as an eight-metre high brick wall came toppling down on the multi-million Villanova College building rehabilitation project during the school holiday period.

Acting Divisional Branch Secretary, Andrew Sutherland said, “This is just the latest in a long list of recently reported serious safety incidents on Hutchinson’s projects. It was nothing short of 'sheer luck' that this was not a catastrophe with multiple fatalities. The area affected by the collapse is adjacent to the tuck shop and would generally be one of the busiest areas for foot traffic throughout the school. If this collapse had occurred either two weeks before or two weeks after it did, the result could have been devastating.

"With the string of recent near misses and the overwhelmingly obvious shift in the business's attitude towards safety, Hutchinson Builders have fast gained a reputation for having the worst safety standards in the industry.

“The CFMEU is seriously concerned about the apparent rapidly diminishing standards of safety on Hutchinson sites and that it will be only a matter of time before someone is seriously injured or killed as a result of their approach to the safety and wellbeing of workers and the public.”

The project, which was initially completed back in 2012, is currently undergoing a potentially costly rehab as steel supports are replaced throughout the building.

Andrew Sutherland said, “Since commencing the correction over 12 months ago, no visible Hutchinson branding has been erected on the job leaving us wondering if this was an effort to distance the company from concerns about safety and to avoid public embarrassment.

“Enough is enough! The CFMEU calls on Hutchinson Builders to stop putting lives at risk. Stop cutting corners in a bid to save time and money at the risk of workers and the community. A life is not worth the extra change in your pocket.”