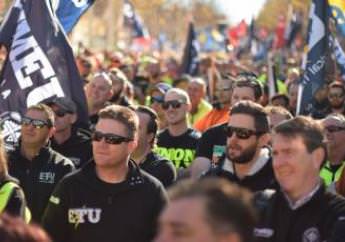 The Construction Forestry Maritime Mining and Energy Union last night called close to 500,000 Australian households detailing its concerns about the Morrison Government's plan to rush legislation in relation to the Trans-Pacific Partnership through the parliament in the coming weeks.

The 30 second message, which targeted voters in the electorates of Page, Dickson, Stirling, Petrie, Hughes, Flynn, Dawson, Forde, and Capricornia, clearly resonated with the community, with almost 90 per cent of those who answered the phone remaining on the line to listen to the entire message.

The content of the automated phone calls was: “Good evening. This call is from the Construction, Forestry, Maritime, Mining and Energy union. Apologies for the interruption –  I’ll be quick. Free Trade Agreements are killing local jobs. But the Liberals and Nats are about to sign up for another one – called the TPP. Your local member [MP name] is right behind it giving it their full support.
It won’t be good for local workers, and it won’t be good for the exploited overseas workers. The Liberals and Nationals have lost their way. Say no to bad Free Trade Agreements.”

The automated calls follow independent polling of 2921 CFMEU members that found 86.5 per cent were opposed to key elements of the TPP, with half saying they would consider changing their vote based on whether or not their local candidate supported the trade agreement.

The union also commissioned ReachTEL polling of 4,645 voters in the Labor-held seats of Bass, Blaxland, Hindmarsh, McMahon, and Rankin, which was conducted last night. It found up to 40 per cent of voters would consider changing their vote based on a candidate's attitude to free trade agreements.

“What’s really staggering about is the level of awareness in the community about the TPP agreement,” said Construction Forestry Maritime Mining and Energy Union national secretary Michael O’Connor.

“For example, in the seat of Hindmarsh 63 per cent of voters were aware of the negotiations around the TPP.

“What’s more, people’s attitudes have changed radically in recent years. When the CFMEU first conducted polling regarding free trade agreements in 2014, 49 per cent of voters thought these agreements were good, while 11 per cent thought they were bad.

“But in last night’s poll, 44 per cent of voters in the seat of McMahon thought these trade deals were good or very good for Australia, while the number who thought they were bad or very bad had grown to 38 per cent.

“What politicians need to understand is that the mood of the community has changed on this issue and it is continuing to change quite rapidly.

“For instance, in the seat of Blaxland, a whopping 69 per cent of people disapprove of agreements that allow worker to be bought into Australia without those jobs first being advertised locally.

“It’s time to draw a line in the sand on these agreements. We need a new way of doing business that puts the interests of working people first and big business second.”