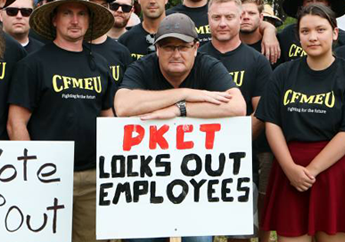 Ongoing lockouts of workers by multinational backed owners of the Port Kembla Coal Terminal have been condemned by the union as unnecessary and heavy handed.

The company is locking out workers every time a ship arrives, and replacing them with a temporary workforce to operate the terminal.

Bob Timbs, South-West Vice President of CFMEU Mining and Energy, said the company’s tactics are a disproportionate response to the union’s moderate action over the Enterprise Agreement dispute.

Action taken by the union – such as limited bans and short stoppages – has enabled the continued functioning of the Port.

“We are not shutting the place down, and the company’s response is heavy handed,” Bob Timbs said.

“They are trying to intimidate and break the workers ahead of their attempt to terminate the Agreement.

“All of this is to get to their endgame, which is to terminate the existing workers and replace them with contract labour that they can easily exploit. This was effectively confirmed in leaked documents from the company and its lawyers last month.

“Workers at the Port Kembla Coal Terminal have made many concessions, and each time they do, the company shifts the goalposts.

“We are drawing a line in the sand, and we will never give up the job security clauses and current redundancy entitlements in our Agreement.

“If multinational companies can come in and rip away people’s livelihoods – then our industrial laws are well and truly broken.”

The company’s application to the Fair Work Commission to terminate the PKCT Enterprise Agreement will be heard from this week.

The union will hold a rally outside the FWC offices in Sydney on the 28th February.