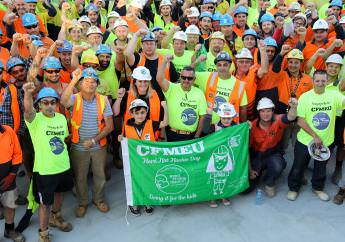 The Turnbull Government’s Building Code has been used on Victoria’s Sky Rail and Tullamarine Upgrade to block efforts by the CFMEU to raise money for the Royal Children’s Hospital Good Friday Appeal.

Workers on the Tullamarine Freeway Upgrade site and the Skyrail project were shocked when they were directed to pull down the flags by joint venture partners, CPB and Lend Lease.

Since 2011, CFMEU members have raised over $826,000 for the Children’s Hospital. This year, CFMEU members hope to break the $1,000,000 mark. However, the joint venture partners used the Turnbull Government’s Building Code to block fundraising efforts by members on both major projects.

The CFMEU’s fundraising efforts are centred around a competition that gives the children of CFMEU members an opportunity to design the annual fundraising flag. That flag is then raised on site and used to promote the Appeal.

CFMEU Victorian State Secretary John Setka said that Building Code had thrown the industry into chaos and one of the many perverse outcomes will be this annual fundraising event.

“We understand that Turnbull’s out there trying to destroy the union movement, but this Code has been so clumsily constructed that the industry is in turmoil. No one is sure what the Code means. The industry is screaming, but they’re not going to come out and say it, because they want to win Government work. They’ve got a gun to their heads and they don’t know which way to jump.

“The response of CPB is an example of this. They’d rather stop union members from raising money for sick kids than risk losing Government works. It’s a disgrace. It’s so ridiculous that CPB actually told us they’d put up the flag if we were to cut out our logo.

“The Building Code isn’t about productivity. It isn’t about more jobs or strengthening the construction sector. It’s about attacking unions at all costs. The Liberals are fixated and on a crusade. They simply don’t care about the collateral. In this case, it’s the kids who cop it,” Mr Setka said.

Following protests by union members on two sites, Lend Lease back flipped on its position late on Monday and have allowed the flags to go up. However CPB continues to refuse to budge.

“It’s the most popular fundraising event of the year for members of the union as many of them know first-hand the important work done by the Royal Children’s Hospital,” said Mr Setka.

Under the Code, the CFMEU’s ability to continue fundraising for worthy causes is one of the many things that are under threat, along with agreed minimum numbers of apprentices, indigenous Australians and women.