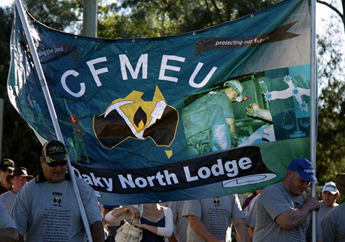 A week after miners went on strike at the Oaky North Lodge, Glencore has continued their unreasonable approach to key problems with their proposed enterprise agreement which would strip workers’ of their conditions and entitlements.

CFMEU Mining and Energy Division District Vice President Chris Brodsky said the mining company was insisting on removing provisions in the existing enterprise agreement including the right for workplace representation when a worker is stood down.

“Glencore’s position would deny employee’s fair and reasonable representation. The approach taken by Glencore is backward and they have offered no reasonable justification for their position,” said Mr Brodsky.

“If Glencore got their way it would also set an extremely dangerous precent for pay and conditions across the entire mining workforce in Queensland.

Mr Brodsky said the work stoppages would continue into next week unless the mining company took a more productive and cooperative approach to negotiations.

“Glencore is asking workers to sacrifice conditions and entitlements while stripping them of basic rights, such as certainty about rostered shifts and the right to be representation.

“Workers are determined to stand up for their rights and entitlements and will not be bullied by this big corporation which seems to be focussed only on taking as much off workers as they possibly can in these negotiations.”

Key issues where Glencore has taken an unreasonable position include:

It is understood that Glencore brought in a replacement contract-based workforce and has used staff employees to perform production duties when strike action was underway.

The CFMEU said it condemned the company for the approach taken and that Glencore should instead focus on sitting back down at the bargaining table and negotiating reasonable terms and conditions.

The CFMEU also said that it was concerned by the use of external replacement workers and the impact it may have in compromising on safety at the mine.