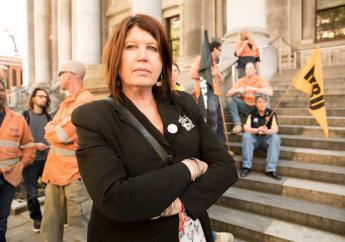 In a formal submission to the coronial inquest into the death of construction worker Jorge Castillo-Riffo, his widowed partner Pam Gurner-Hall has called for the establishment of a new, independent safety commissioner for South Australia and for coronial inquests into deaths at work to be mandatory.

Mr Castillo-Riffo was crushed to death on the Royal Adelaide Hospital building site in November 2014.

In a formal submission to the coroner, Ms Gurner-Hall and her partner’s union, the CFMEU, have made several recommendations that, if implemented, could prevent further tragedies.

Ms Gurner-Hall has called for a ten-year ban from all government projects for the building contractors involved, Hansen Yuncken and Leighton Contractors (a subsidiary of CIMIC Group that has been renamed CPB Contractors).

“He died because of appalling safety failures by his employer and Hansen Yuncken Leighton Contractors, who said one thing about safety and did the opposite.

“Jorge was frightened; he knew the work was dangerous. His experience in the Adelaide construction industry taught him not to complain about dangerous work if he wanted a job.

The union and Ms Gurner-Hall believe the investigation into Jorge’s death was bungled by Safework SA, who failed to successfully enforce safety through prosecutions or civil penalty cases.

“The CFMEU has more positive impact on workplace safety in the construction industry than any Government agency,” Ms Gurner-Hall said.

The CFMEU submission also called for a new regulatory regime to ensure the safety of mobile elevated work platforms, and for funding to assist next of kin navigate the justice system.

“It is time to start treating workplace deaths as seriously as other tragedies,” CFMEU Construction and General Assistant National Secretary Andrew Sutherland said.

“Construction companies have been allowed to put profits before people’s lives and have bent over backwards to avoid accountability.

“In this case, they intentionally breached their legal obligation to conduct an investigation in accordance with their workplace health and safety plan and have hidden behind legal professional privilege.

“When the safety regulator meets with the contractor at a restaurant to discuss the investigation into a worker dying on their site, you know the system is completely broken.

“We need to strengthen safety regulation to prevent further deaths, ensure that any death in a workplace is investigated by a coroner, and provide support to the families who have to navigate the justice system while grieving.

“Our recommendations have been carefully considered, and we stand ready to work with state and federal governments to implement them.”

In addition to recommendations designed to improve the substandard regulation of elevated work platforms and ensure that principal contractors are held accountable to WHS management plans, key recommendations made by the union and Ms Gurner-Hall include:

- Mandatory coronial inquests should be held into all deaths at work, with a mandatory requirement for the reporting of any action taken, or proposed to be taken, in consequence of any findings and recommendations made;

- Families should receive funding to be represented;

- An independent safety commissioner should be established in SA whose duty it is to review, comment and provide recommendations concerning the safety record of companies who tender for government construction contracts work over $5 million;

- Hansen Yuncken and Leighton Contractors (now known as CPB Contractors) should not be awarded any further government contracts for at least 10 years;

- SafeWork SA has failed to commence any prosecutions or civil penalty proceedings for breaches of workplace safety laws that do not result in injury or death, and this needs to stop;

- Introduction of industrial manslaughter laws; and

- A judicial inquiry should be held to report on measures to stamp out employment practices that deter construction workers from raising concerns about workplace safety.