Victory for workers in the Federal Court, as Queensland builder fined three times for refusing union entry to work site 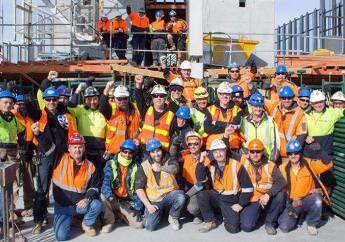 The CFMEU has won an appeal against a decision in a long running dispute between the union’s Queensland Construction branch and property developer Susan Menso.

In July last year, Federal Court Judge Vasta ruled in favour of the developer and her company over a dispute around right of entry at a work site in South Brisbane. The union was refused entry to the site by Susan Menso on three occasions in December 2015.

The union appealed a series of legal arguments around the Judge’s right of entry ruling, which it won in a full court today. Three Federal Court Judges found that Susan Menso and her company had contravened the Fair Work Act by refusing entry on three occasions.

The matter was referred back to the Judge Vasta to determine penalties for Susan Menso and her company.

CFMEU National Construction Secretary Dave Noonan said it was a common-sense decision by the full court.

“This decision will help ensure our officials are able to exercise their right to enter workplaces and conduct important safety work, without interference by employers,” Dave Noonan said.

“It will also act as a future deterrent to employers in using overly technical arguments to try and defeat the right of entry provisions in the Fair Work Act.

“The union has been vindicated in its long drawn out pursuit of justice for construction workers.”

He said the case was another example of the ABCC’s failure to do anything about employer breaches in the construction industry, with the matter only being pursued by the union.

“The ABCC is meant to be the construction industry watchdog but they do nothing about breaches of law that compromise the safety of construction workers. They are only interested in partisan attacks on unions and their workers.”